RealWorldCTF 2018 had a really fun challenge called “P90 Rush B”, an allusion to a desparate tactic employed in the Valve game “Counter-Strike: Global Offensive”. It was about finding and exploiting a bug in the map file loader used by a CS:GO server. During the CTF, I exploited a stack buffer overflow that was later described well in a writeup by another team. 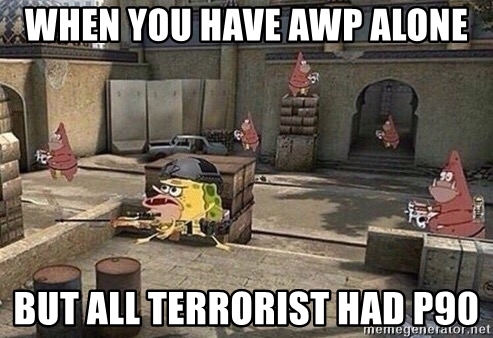 Since this bug also affected the official CS:GO Windows client, it was eligible for Valve’s bug bounty program, and was in fact just a minor variation of an older report, so I reported it quickly after the CTF and it was patched promptly.

I collected an encouraging payout and decided to spent a bit of time to find similar issues in this component, and learn a bit about black-box fuzzing in the process, which I have not had the opportunity to do in the past. This article should serve as a record for myself and others of my experience with AFL in QEMU mode and the approach I took to fuzzing BSP files. It helped find and analyze 3 remotely reachable stack-based and 5 heap-based memory corruption issues in csgo.exe in about 3 days.

I should mention that Valve did not consider my heap-based bugs (linear overflows and some semi-controlled out-of-bounds writes) worthy of fixes, without me providing them with a full exploit, which would be very hard due to ASLR. Neverless I think these bugs would be very useful as part of an exploit chain. So you can find yourselves real 0days if you decide to reproduce my research.

Please note that I am a noob when it comes to black-box fuzzing and willing to learn, so please call me out if some of my decisions were bad, or I missed some tooling that could have made my life much easier. I appreciate any kind of feedback on this project.

The file format used for maps in CS:GO (and probably all Source engine games) is called BSP, short for binary space partition, which is a convenient representation of objects in n-dimensional space. The format supports a lot more than just 3D information however. BSP files are handled by both server and client, because both need a certain subset of the map information to perform their respective tasks. It is remote attack surface because the client will download unknown maps from the server on a server-initiated map change.

What’s interesting from a security research perspective is that the outermost parsing code is shared between client and server, and mostly corresponds to what we can find in a 2007 leak of the Source engine source code. As far as I can tell, the code base has not changed much since then, and almost no security bug fixes have been applied to the BSP parser. The entry point of the parser is the function CModelLoader::Map_LoadModel.

For simplicity, I decided to fuzz the Linux server binary rather than the actual client (which can also run on Linux). It seemed more natural to fuzz a CLI application than a full-blown 3D game. With this approach I would obviously not have been able to find any client-specific issues, but I was hoping for low-hanging fruit in the shared code. The shared parsing code is already quite complex, and I did not have high hopes of getting any kind of decent performance when covering even more of the map loading process. My goal was at least 100 executions/second per core. To install the dedicated server, you can follow the official instructions.

I consulted a YouTube tutorial to create a very simple map in Hammer and was surprised to find it a whooping 300KB in size already. The large size is mostly due to the fact that most of the contained model data is stored in uncompressed form. So I wrote a dirty little script that strips out some of the unnecessary data, while keeping the file structure intact. Specifically, it strips down the data contained in the largest lumps to ~5% of their original size. The result is a 16KB file which probably can’t be fully loaded in the client anymore, but is consumed by Map_LoadModel without errors. This was my entire corpus for now.

This is how you would load this map in the server:

It will load the map from the file csgo/maps/test.bsp. This takes about 15 seconds or more, so absolutely not an option to use it for fuzzing directly. Instead I decided to write my own wrapper around the shared libraries used by the server binary, the most important of which (for my purposes) are:

The wrapper does the following:

This requires a couple of patches to engine.so and libtier0.so, which are applied by a Python script. Both the wrapper and the patching script need to be adapted for every new version of the server, to incorporate changed offsets.

There are some simple changes I had to make in AFL itself:

With those changes applied, running the fuzzer becomes as simple as

Multi-processing is recommended, and is the default if you use my wrapper script. Here is the state after 5 minutes of fuzzing on 8 cores: 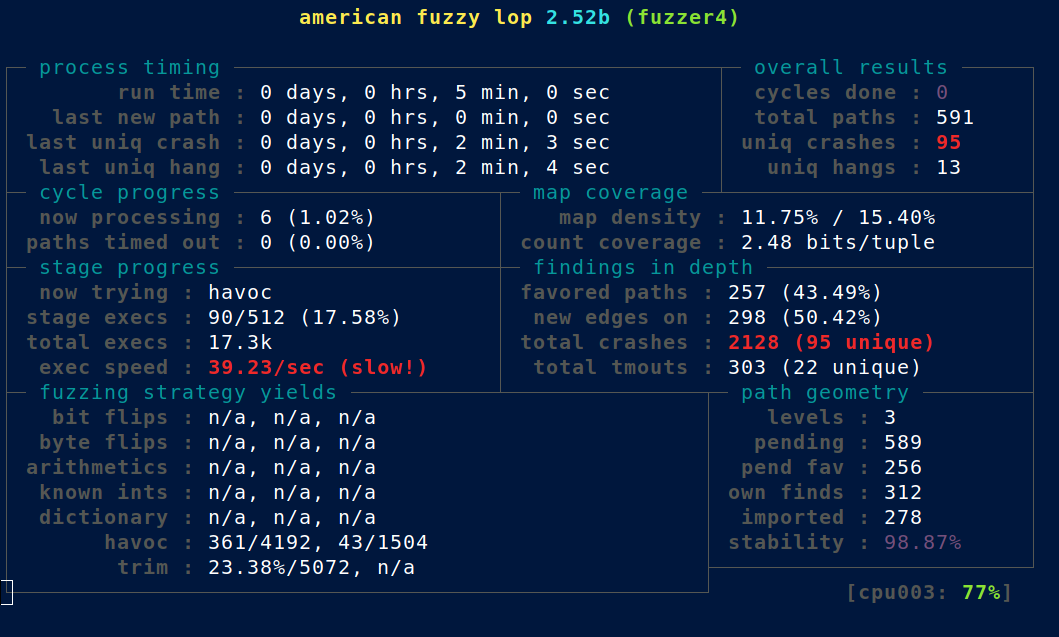 I get an average of ~50 executions/second/thread on my Ryzen 7 1800X. And after 1 week (the VM was suspended for another 2 weeks since then): 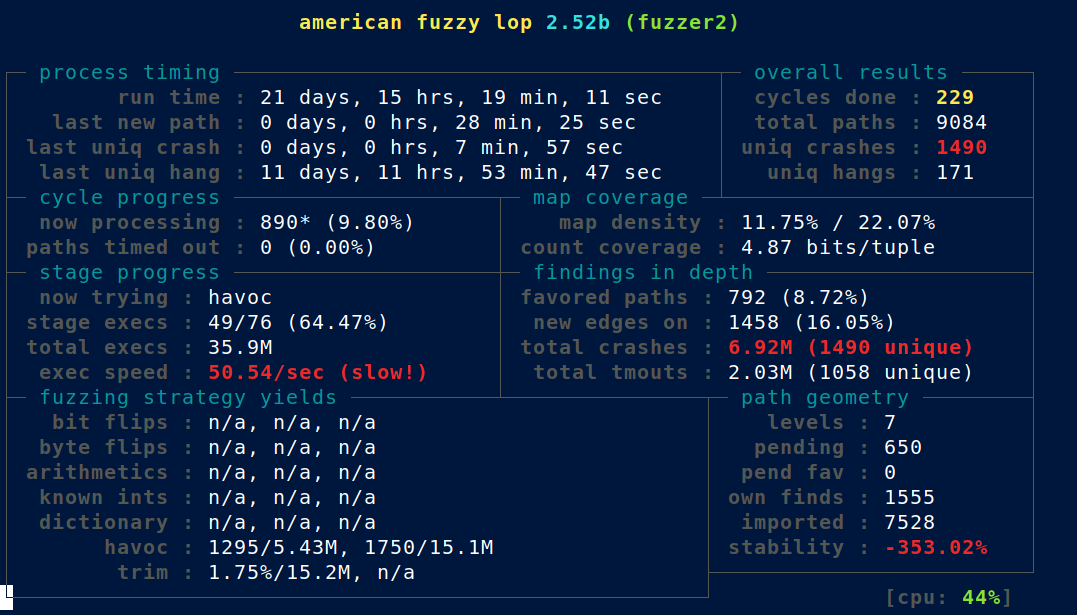 Clearly we need some way of separating “good” bugs from uninteresting ones (such as pure out-of-bounds reads) here. I went for a simple deduplication based on the call stack and then ran each unique sample in Valgrind. Then I grepped for Invalid write … I know, elaborate stuff.

This will take a while. I am disabling ASLR here so that the crash locations are unique. I then started up valgrind once more manually to note down the base addresses of the libraries, and find the correct library and offset for each “invalid write” location.

Then for each of those locations, I manually reverse engineered the binary to find out if it corresponds to a function in the leaked source tree. In some cases it was new code, but the context provided by the available source code helped immensely with the reverse engineering. I gradually symbolized a lot of the BSP parser code, also using a collection of types gathered from the leaked header files.

These are my personal lessons from this little project:

[This is just the report I sent to Valve. It’s a WONTFIX, i.e. will probably remain 0day as long as nobody provides them with an exploit.]

A heap buffer overflow occurs in CVirtualTerrain::LevelInit because the value dphysdisp_t::numDisplacements variable can be larger than g_DispCollTreeCount, and the assert that checks this case is not present in the release build. An old version of the code can be found at https://github.com/VSES/SourceEngine2007/blob/master/se2007/engine/cmodel_disp.cpp#L256:

The assert at [[ 1 ]] is not present in the release build, so an overflow can occur at [[ 2 ]]. What’s notable is that fact that the values g_DispCollTreeCount and numDisplacements, as well as the contents of pDataSize are taken verbatim from the BSP file, hence a lot of control can be exercised by the attacker over the heap contents following the m_dispHullOffset buffer. Thus, exploitability is very likely, especially since ASLR is not enabled for many modules on Windows 7.